Use cases and user scenarios for EEAttachments

On this page I collect customer problems for you that could be solved by using EEAttachments.

One day there was a requirement to send production data and reports of a plant by e-mail on request. So it should be stated in the subject which measuring point is needed and the result should be sent to the enquirer as a small report or simply as a value.

The system could be implemented via EEAttachments. The programme listens at a mailbox set up for this purpose and forwards the subject and the mail address of the enquirer to the customer's script. The Powershell script recognises the corresponding measuring point in the subject and retrieves this data from the control system. The Powershell script then sends the mail to the enquirer automatically via send-mailmessage or EWS. In order to speed up the response time, EEAttachments was changed to "StreamingNotification" (see \EEAttachments\EEAttachments.exe.conf).

Last year, a customer had the idea of automatically preparing his invoices for the DATEV import so that he can drag and drop them into his DUo. Optionally, he wants to use the programme Belegransfer offered by DATEV in the future, which automatically imports the invoices as soon as they land in the directory.

There are already some prepared scripts to structure the mails according to From address, including this possibility. This creates a directory for each e-mail address:

In the variant currently implemented at the customer's, the invoices are searched for manually in the directory and dragged into the DUo Explorer window, where they can then be assigned. The next step would be to use the above-mentioned document transfer.

Update from 06.07.2020: DUo now also offers the option of sending invoices by e-mail. This means that the option shown here can now only be seen as an alternative. 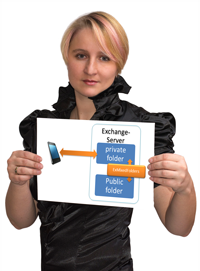